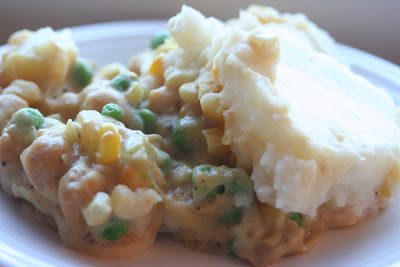 So, Son#1 and Son#2 now both have fevers and decreased appetites. The doctor assures us it is just a cold (with respiratory infection) and it will clear up soon enough. Tonight my wife (I guess I should call her Vegan Mom) created this kid-friendly dish that is as close to comfort food as you can get without boiling a chicken carcass and adding noodles.

INGREDIENTS:
- 1 onion, diced
- 1 rib of celery, diced
- 2 tbsp oil
- 1 cup eggplant, peeled and diced
- 2-3 cups cooked chickpeas
- 3/4 cup soymilk
- 2 tbsp flour
- 2 tbsp "chicken" broth powder
- 1/4 cup nutritional yeast
- salt and pepper to taste
- mashed potatoes (about 7 medium potatoes)
-frozen peas and corn
METHOD:
1. Make mashed potatoes as usual (use soymilk and vegan margarine).
2. Meanwhile, saute onion and celery in oil on medium heat until translucent. Add eggplant and saute until onion is golden and eggplant is soft. Add chickpeas and mix through.
3. Whisk flour into soymilk in a separate bowl (or put in container with a lid and shake until mixed). Add to chickpea mixture and bring to bubbling. Add broth powder and nutritional yeast. Add salt and pepper.
4. Put a layer of mashed potatoes into a large Corning ware or Pyrex dish. Put a layer of the chickpea mixture on top, then a layer of frozen peas. Repeat, this time using a layer of frozen corn. Top off with a thick layer of mashed potatoes.
5. Place in oven and bake for about 40-45 mins, until potatoes are browned.
Posted by Vegan Dad at 6:59 PM

Email ThisBlogThis!Share to TwitterShare to FacebookShare to Pinterest
Labels: chickpeas, comfort food
Newer Post Older Post Home
All images and recipes (unless otherwise noted) are property of Vegan Dad. Please do not re-post or otherwise duplicate without permission.