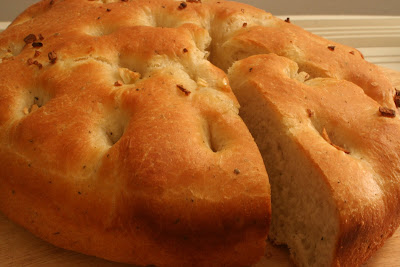 The last 2 weeks or so have been pretty tiring. Son#1 had a fever that turned into a cold. When he passed it to Son#2, it became croup, which resulted in breathing trouble and a late night trip to the emergency room. Now Son#3 has become a coughing, hacking fountain of liquid boogers who feels miserable and lets us know by crying all the time. So, last night Vegan Mom and I shoved some pasta in their mouths for dinner, put them to bed, and sat down for a meal together. Actually, it was the same pasta, but I added in this focaccia.

INGREDIENTS
- 3 1/4 tsp active dry yeast
- 1 1/2 cup warm water
- 3 tbsp olive oil
- 5 cups white bread flour
- 2 tsp salt
- 1 tbsp dried sage
- 4 tbsp olive oil
- 4 garlic cloves, minced
METHOD
1. Whisk yeast into the water in a large bowl until dissolved. Mix in the olive oil. Sift in flour and salt, add sage, and stir into a rough dough. Knead on a lightly floured surface, or in a counter top mixer, for 10 mins, until smooth.
2. Let rise for 1.5 hours in a large oiled bowl, covered. Punch down dough and knead for a few mins. Divide in two equal pieces. Shape into balls, then press into 2 non-stick, or lightly oiled, 10 inch pans. (The dough will spring back a bit when you do this. Just let it sit for a few mins, then push it again to the edges. It will stay there eventually, just be patient)
3. Cover both pans and let rise for 30 mins. Uncover, and poke dimples into the dough with your fingertips (Ooohh, a wise guy guy, eh? Nyuk, nyuk, nyuk!) Cover again and let rise until doubled in bulk.
4. Meanwhile, preheat oven to 400 degrees. When focaccia are ready to bake, brush 2 tbsp of oil over each loaf and sprinkle half the garlic over evenly. Bake for 25-30 mins, or until loaves are golden. Serve warm.
We then ended the night with a movie and the Banana Split Cupcakes from Vegan Cupcakes Take Over the World, topped with melty chocolate ganache and walnuts, and flanked by scoops of So Good Vanilla ice cream (which we usually never buy on account of it being a total rip off). Hey, we deserve it. 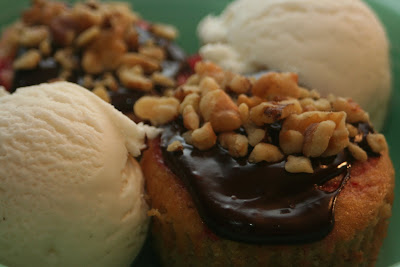 Email ThisBlogThis!Share to TwitterShare to FacebookShare to Pinterest
Labels: baking, Italian
Newer Post Older Post Home
All images and recipes (unless otherwise noted) are property of Vegan Dad. Please do not re-post or otherwise duplicate without permission.