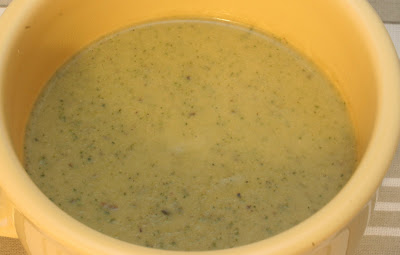 Don't let the crappy photo fool you--this soup is awesome. While I love to cook, I really don't know a thing about photography. Basically, I put my dishes on the ironing board and take pics with a flash and tripod. I still have yet to figure out a good way to photograph soup.

METHOD
1. Heat oil and margarine in a stockpot over medium heat. Cook onions and garlic for about 5 mins, until onions are translucent.
2. Add in sliced zucchini and oregano. Cook for 5 mins, or until zucchini begins to soften.
3. Pour in stock and bring to a boil. Partially cover, lower heat, and simmer for 20 mins, or until zucchini is cooked through.
4. Remove from heat and blend with a hand blender until very smooth. Stir in nutritional yeast and soy milk/creamer. Season with salt and pepper. Reheat if necessary. Serve.


The End of Vegan Mofo
Unfortunately, Vegan Mofo ended on more of a whimper than a bang in my house. First, I had planned to make a delicious risotto to go with the soup, only to find that I forgot to buy arborio rice at the bulk food store. (snort) I also decided that I would try the chickpea cutlets again, with a nice white wine/garlic/lemon sauce to go on top. I took my own advice and pulsed the chickpeas, which worked beautifully. I also decided to bake them this time. Everything was going great, but I miscalculated cooking times and ended up finishing the cutlets before the soup. I decided I could keep them warm in the oven while everything else finished up. Well, that was a big mistake. I ended up baking the cutlets into chickpea briquettes. To top it off, no one liked my white wine/garlic/lemon sauce. *sigh* I don't take failure in the kitchen very well. If only a case of beer was in the grocery budget . . . .
Posted by Vegan Dad at 10:03 PM

Email ThisBlogThis!Share to TwitterShare to FacebookShare to Pinterest
Labels: soup, zucchini
Newer Post Older Post Home
All images and recipes (unless otherwise noted) are property of Vegan Dad. Please do not re-post or otherwise duplicate without permission.