Crispy Veggies in an Orange-Ginger Sauce 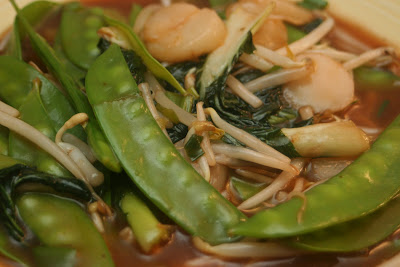 As promised, here is the final dish from last night's Asian food-fest. I bought a bunch of veggies at the grocery store this week that I thought would go well in a stir-fry, and added this pre-made sauce which, for coming out of a bottle, was not half bad.
INGREDIENTS
- 2 tbsp oil
- large handful of snow peas
- 4 baby bok choy, washed and trimmed into stalks
- 1 small can sliced water chestnuts
- 2 cups bean sprouts
- 1/2 jar VH Orange Ginger Sauce
METHOD
1. Heat oil on med-hi in a wok. Throw in snow peas and stir-fry for 2 mins.
2. Add in bok choy and stir-fry until it starts to wilt.
3. Add in water chestnuts and bean sprouts and stir fry for 1 min.
4. Add in sauce, heat to bubbling, and serve.
NOTE: If you don't want to use the bottled sauce, I think the taste could be replicated by stir-frying fresh ginger with the snow peas, then add orange juice, soy sauce, and brown sugar in at the end.
Posted by Vegan Dad at 8:10 PM

Email ThisBlogThis!Share to TwitterShare to FacebookShare to Pinterest
Labels: Asian, snow peas
Newer Post Older Post Home
All images and recipes (unless otherwise noted) are property of Vegan Dad. Please do not re-post or otherwise duplicate without permission.