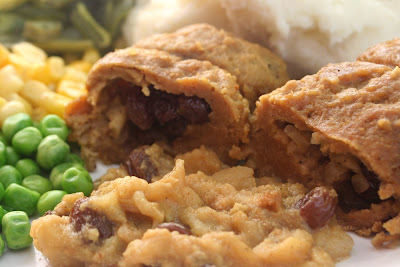 It snowed this morning! That's right. Snow in late May. Now, it wasn't much, just a few flurries, but that's not really the point is it? I can't believe it is actually cold enough to snow! And now they have issued a frost warning for tonight because the temperature will be down around zero (32 F). So blame the cold weather on this rather wintry dish I made tonight. I think one could easily whip up a traditional stuffing and make a nice holiday meal out of this recipe. This is the latest creation in my attempt to bake seitan and avoid the hours and hours of simmering of a more traditional seitan. I was happy with the result and think this recipe could be adapted to make an much easier version of the Chickenless Kiev I made a while back.

INGREDIENTS
Seitan
- 1 1/4 cup vital wheat gluten
- 1/4 cup vegan chicken broth powder
- 1/2 tsp garlic powder
- 1/2 tsp onion powder
- 1/2 tsp paprika
- 1/2 tsp salt
- 2 tbsp oil
- 1 tsp soy sauce
- 1 cup water
Filling
- 2 apples, peeled and finely diced (I used McIntosh)
- 1 small onion, finely diced
- 1/2 cup raisins
- 1/2 tsp salt
- 1 tsp poultry seasoning
- freshly ground pepper
- 1 apple, peeled and cut into chunks
- 1 cup boiling water
- 2 tbsp vegan chicken broth powder
METHOD
Preheat oven to 350 degrees
1. Make the seitan. Mix wheat gluten, broth powder and spices in a bowl. Whisk water, soy sauce, and oil in another and add to flour. Mix into a dough and knead for a few mins. Shape into a log and set aside.
2. Make the filling. Mix apples, onions, raisins, salt, poultry seasoning and pepper together.
3. Slice seitan into 6 equal pieces. Press each piece as flat as you can with the heel of your hand. Place about 2 spoonful of filling on each piece of seitan and roll up. Secure rolled seitan with two pieces of kitchen string. Not all the stuffing will be used.
4. Put extra stuffing and the other cut up apple in the bottom of a medium sized greased baking dish (I used an 8 x 11.5" dish). Mix broth powder into the boiling water and pour over top of apples. Place seitan rolls on top.
5. Cover dish with foil and bake for 30 mins. Remove foil and turn seitan over. If apple mixture looks too dry, add a bit more water. Spray tops of seitan with a little oil and bake uncovered for 30 mins, or until seitan has browned and is firm to the touch.
6. Remove string and serve seitan with the apple stuff (let's call it chutney) on the side.
Posted by Vegan Dad at 8:27 PM

Email ThisBlogThis!Share to TwitterShare to FacebookShare to Pinterest
Labels: apple, fake meat, seitan
Newer Post Older Post Home
All images and recipes (unless otherwise noted) are property of Vegan Dad. Please do not re-post or otherwise duplicate without permission.