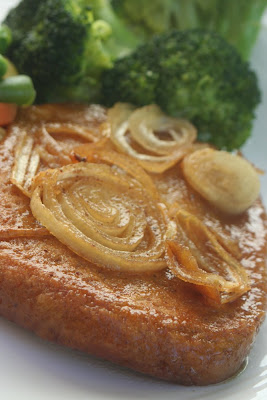 Tonight was a seitan experiment. The other day I made the much ballyhooed Seitan O'Greatness for my tortas. I changed the ingredients a bit to make more of a "chickeny" seitan, but kept the liquid:dry ratio and baking method. I found the end result to be rather tough and dry. So I thought that I would play around with baking seitan another way. The end result this time was a spongier seitan that could have used a little extra glaze to moisten it a bit. The boys absolutely loved it and said it was now their favorite dish (yeah, right), so score on that account. I was not as impressed, but think the recipe is a good start. Here is the recipe if you want to give it go.

INGREDIENTS
- 1/2 cup white kidney beans
- 1 cup plain soy milk
- 2 tbsp oil
- 1 tsp onion powder
- 1 tsp garlic powder
- 1 tsp paprika
- 1 tsp salt
- freshly ground white pepper
- 2 tbsp nutritional yeast flakes
- 1 1/3 cup vital wheat gluten
- 2 tbsp oil
- 1 large onion, sliced
- 1 cup water
- 1/2 cup amber (Grade B) maple syrup
- 1 tsp salt
- 1/2 tsp cinnamon
METHOD
Preheat oven to 350 degrees
1. Blend beans, oil, and soy milk in a container with an immersion blender until smooth. Set aside. In a medium bowl, mix together spices, yeast flakes, and wheat gluten. Add liquid and mix together into a dough. Shape dough into a log and slice into 6 equal slices. Shape each slice into a cutlet.
2. Heat the 2 tbsp of oil in a large frying pan over medium heat. Fry each cutlet for about 1 min per side, until lightly golden. Transfer to a 9 x 13 baking dish and top with onion slices.
3. Heat water, maple syrup, salt, and cinnamon in a saucepan. Bring to boiling and pour over cutlets making sure tops are well coated.
4. Bake for 60 mins. Once sauce begins to bubble (after about 15 mins), baste cutlets every 10 mins. Sauce will disappear by 60 mins, and cutlets will get nice and golden. Serve.
Posted by Vegan Dad at 9:29 PM

Email ThisBlogThis!Share to TwitterShare to FacebookShare to Pinterest
Labels: maple, seitan
Newer Post Older Post Home
All images and recipes (unless otherwise noted) are property of Vegan Dad. Please do not re-post or otherwise duplicate without permission.