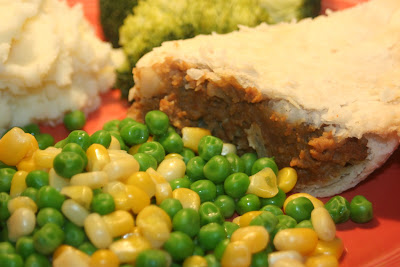 Today I got the idea to make a tourtiere from the seitan I made on the weekend. Of course, I was at work when the epiphany hit, so I emailed a recipe to my wife and she made it happen. I adapted Bryanna Clark Grogan's recipe found here. The crust is the same one used for the pot pie. The kids bolted down the whole thing.
FILLING:
- 1 large onion, minced
- 2 cloves garlic, minced
- 1 lb. seitan, cut into chunks
- 1/2 cup hot water mixed with 1 veggie boullion cube
- 2 tbsp ketchup
- 1 1/2 tsp savoury
- 1/4 tsp each allspice, cloves, cinnamon, sage, thyme, pepper
- 1/2 lb potatoes, peeled, boiled, and mashed with 2/3 cup boiling water
METHOD:
Preheat oven to 350
1. In a large nonstick skillet over high heat, saute onions and garlic in oil. When onions are soft, pour into a large bowl.
2. Grind seitan in food processor or food grinder. Mix with onion mixture, hot water-boullion mixture, ketchup and seasonings. Add potatoes; mix well.
3. Press seitan mixture firmly into bottom crust. Top with crust and cut slits to allow steam to escape.
4. Brush pastry lightly with soymilk; bake 50 minutes, until crist is light brown.
Posted by Vegan Dad at 9:37 PM

Email ThisBlogThis!Share to TwitterShare to FacebookShare to Pinterest
Labels: Canadian, seitan
Newer Post Older Post Home
All images and recipes (unless otherwise noted) are property of Vegan Dad. Please do not re-post or otherwise duplicate without permission.